I want to play a game.

Fortunately for you, I am not Jigsaw and you are not about to die.

The game is called Squad, and the year is 2015/16 several months before I came into Stack Up I used to belong to a clan/community by the name of RustyInPlaces or RIP for short. I used to play in a league for the aforementioned game Squad.

During my time in the clan, it was over a year but less than 2 and during that time I came across a young gentleman by the name of Petros or Maverickos. I used to hang out and squad up with him a lot. We used to play Squad and Escape From Tarkov a lot, together. One day he leaves a sad message, he is saying goodbye because he has to go to basic.

It was a sad day throughout the forums because he’d been so active in the community.

A lot of the times in clan matches frequently in the public servers when he could. For me, it was rough because we talked a lot, played together a lot when he wasn’t there to play with anymore. In Greece, there’s mandatory conscription of 9 months and depending on your family size you can serve less time. I am not familiar with the ways of Grecian military but I will use US Military terms to fill in the gaps.

They assigned him to an ordinance company with tasks such as weapon maintenance (G3A1, HK11, M4A1, MG3 were among the rifles he serviced) tank and artillery shell handling and storing. A lot of the nights and days we talked he was doing such jobs, not only that but as part of his service, he also had to do security.

He pulled nights and as well days on gate watch, fire watch, helping the cook or as you Americans say “KP”

Now, you may ask yourself how does this relates to StOP well it’s relevant because this was the single most important turning point in me having lead down the path to be part of this program. I helped someone in and out of their service just by being there. It’s the essence of the program itself, being there not being sympathetic but empathetic.

The program is a suicide prevention and mental health initiative that has gained some traction throughout the months as the program expands and new opportunities arise, the more important the work becomes. It all started as something internal because there had been quite a few instances of members of the organization that were having trouble coping with the circumstances.

The service provided by StOP does not replace any professional medical or psychiatric advice. As the program grew more people came into the program and shared with me some of the drives that inspire them to be part of the program.

At the end of the article, I will post some of their testimonies. 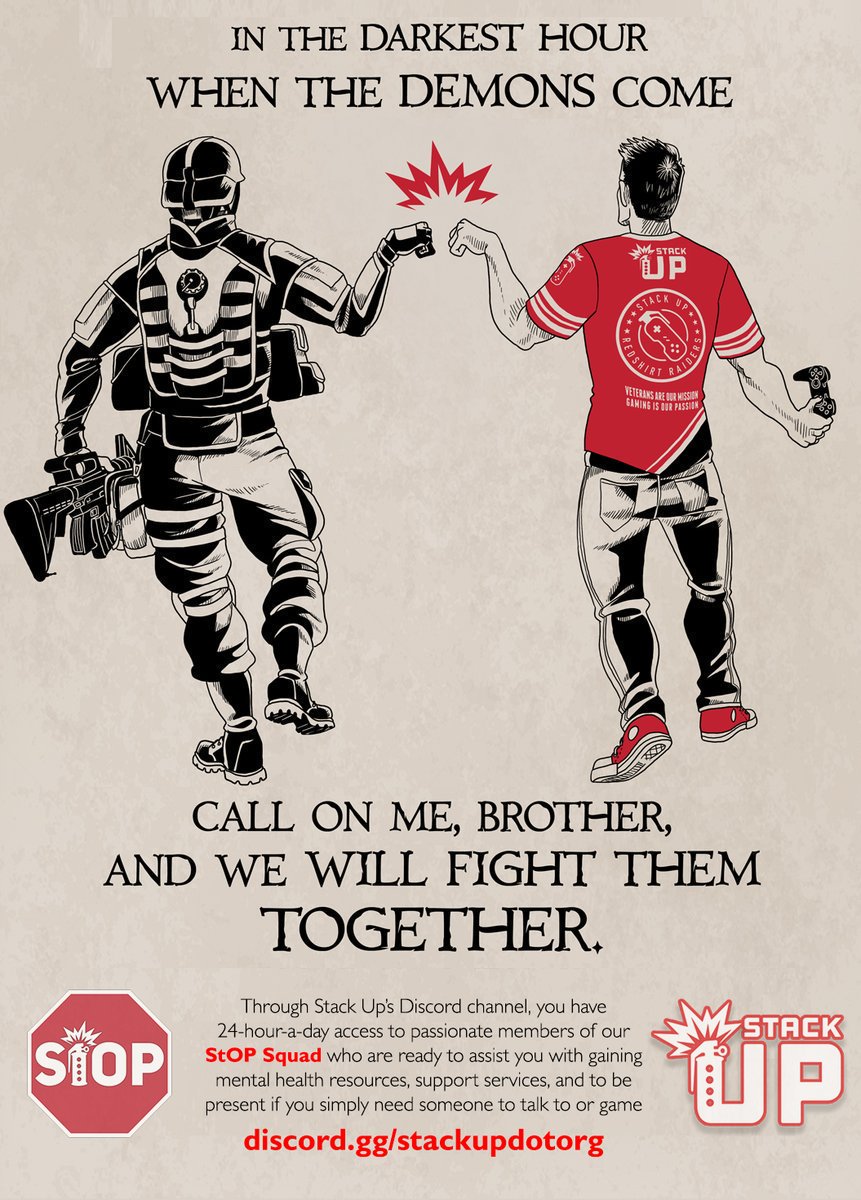 When you come as a potential member you get put through a curriculum provided by one of our partners (PsychArmor.Org) The curriculum is tailored towards providing care to a service member or veteran. Some of the courses provided by them are as follows; MIlitary Culture, Wounded veterans and their families, Suicide Prevention Intervention and Postvention. These are just some of the courses created by veterans. Many among them mental health professionals in their own respective fields. The courses provide a lot of insight and technics to use on how to handle veterans and service members in crisis.

A lot of those technics can be extrapolated and used in the civilian world. Once you finish the courses you’ll go through some oral reviews these oral reviews are not a test, it’s only a reenactment of a situation to see how you respond. The preceptor will monitor your conversation with a proctor and see where you are at with the courses given by Psych Armor. Once finished both the preceptor and the proctor will talk debrief and review with you. You will go through six of these oral reviews then after that, you will undergo a series of additional courses that will grant you a HIPPA Compliance and Security Certification.

We provide user rights and responsibilities that charges (Ward or someone under your personal care) sign and acknowledge that any and all information given is strictly confidential.

What really makes the team great is the ability to be there for each other not just for others. This is an all-volunteer force mind you, everyone has lives ailments and problems of their own. The passion that drives them here is also the passion that binds us together. We are a team, we are a unit, that individually acts like one. Because when someone comes in and is in crisis, everyone is at the ready in case one of the StOP members ma need assistance with context, advice even resources.

A lot of the people involved come from mental health aspirations such as studying in the field or have been through traumatic experiences and have insight understanding into providing a reactive response to someone else in an empathetic compassionate manner.

One team, one fight. Stack Up strong!

Hope you enjoyed it as this means a lot to me being able to write these words and have it published on the Stack Up platform. They say that people over the internet are not your ‘real friends’ and this is not true. Sometimes the connections made through video games or online communities are stronger than the bonds made with people you meet in person.

Anyone that is part of an online community can attest to this.

Here are the aforementioned testimonies:

ShadowToruk
“You asked for the reason I chose to be a part of StOP. Simply put, I have seen the dark places veterans and civilians alike can go, and because of that I wanted to do whatever I could to help”

Mr_Chainsaww
“Joined StOP because I wanted to help Stack Up further its mission to support our military and veterans. As an active military, I understand how hard it is to seek help especially with the way mental health has been stigmatized. I want to help dispel those stigmas and get folks the help they need which is something we are clearly falling short with as a country”

Article-7
“I have served in the military, been a police officer and a firefighter for the past 27 years. As a first responder to the Marjorie Stoneman Douglas High school massacre, I turned to my fellow StOP member to help cope. There is no way to explain the level of compassion and commitment the StOP team members bring to help those in need. These selfless volunteers are available year-round to assist in countless situations”

PapaCrete
“I was never in the Military. However, I was a commander for our SWAT Negotiators when I was on the job. I truly got the sense that I was meant to help people through the “gift of gab” for lack of a better word. Miltary Folks face often untold frustrations with no avenue for release. This can have tragic endings. I feel it is our duty to at least give them an avenue for venting and an ability to get resources to hopefully help them. It is the least we can do for the sacrifices that our Military and their Families make every day”

Hiramkunz
“To help my battle buddies. I understand where they are coming better than a lot. I go through a lot of what they do. it’s for anyone who truly needs support. A battle buddy is a term we use for peer”

Tryum.ph
“I joined StOP to be able to give back to the community that has done so much for us. I stay because as I help others, so too am I helped in return”

Kayradim
“The overall concept of what the StackUP Program and StOP stand for is what keeps me driving to be a part of the program. It’s all about the bigger picture and what we can do to help not only our fellow brothers and sisters in arms but our fellow citizens who may be in a mental health crisis”

Crossforge
“I grew up an Airforce brat, born In North Carolina, and raised everywhere else. There were two things I was constantly around growing up, video games and military personal. So Stack-Up was the perfect fit. About 20 years ago I befriended a struggling veteran. Though, I couldn’t provide him with financial support. I could be his friend, hang out with him, and provide moral support. I didn’t think it was much of a big deal until I was told otherwise. And how many people, surprisingly, wouldn’t even give him the time of day. My friend managed to get his life back together and has moved on, not sure where he is now, but looking back and now looking forward with Stack-up, I figured I could do more and help more veterans the way I helped my friend. That is why I joined STOP”

Aspiring streamer and writer. I am a volunteer for Stack Up from the island of Puerto Rico.

Enter your e-mail address and subscribe to our newsletter.