“You want your lives back. I get it. So I’m gonna find Bill and I’m gonna end it. I’m gonna do it my way and you gotta be right with that”

There are many interesting aspects of his psyche differences the albeit similar yet sometimes slightly different takes on this character.  He always has a distorted perception of the world but at times very clear. With a slight misanthropic view towards society after the loss of his family, he’s always there to save the innocent regardless of who they are or what they did, because it’s the right thing to do. Putting anyone down that brings similar pain to those around him, very much like Batman and a couple of others. As someone who becomes the trauma he faced, bring that same level of fear into those who do wrong.

Jon Bernthal is one of my favorite actors, recently purchased the Wolve’s Collector’s Edition just because of Bernthal’s appearance as the main antagonist in the next entry of the Ghost Recon franchise, a game I have been a fan of since it’s the first iteration back in 2001 developed by Red Storm Entertainment. Jon, a classically trained method actor of whom I relate a lot to him as a human being.

The Frank Castle character definitely is some of the best story content out there. 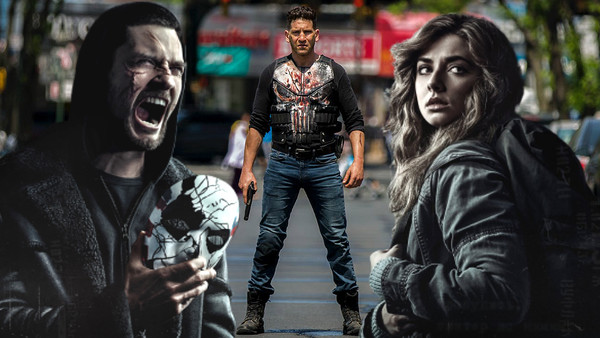 The carpet bomb cancellation of all Marvel series on the Netflix platform is sad yes. I am not going to hold my breath but hope that someday maybe these series can be rebooted with the same actors on their new respective platform. I am a huge fan of them all, I think the main problem with most of the series perception was their own expectation.

People expect things to be a certain way and when things are not the way they want it, they are disappointed and lash out, because it’s not what they envisioned.

The typical trend these days in the information superhighway.

We find our anti-hero in hot water this time around because of his distorted moral compass. While trying to put the events of surrounding the loss of his family trying to it behind him he cruises the country and finds himself in a small town. Comes across a sassy young girl Rachel whom he crosses paths with, while there’s a trained team of hitmen sent out to kill her, why?

With the constant struggle of him transcending who he is or embracing it. When all of a sudden a different problem surfaces a problem from the past. The Punisher is definitely the grittier of all Marvel series, darker tones, touching on things that are neglected such as mental health.

That’s why I am part of a mental health and suicide prevention initiative by the name of the Stack Up Overwatch Program or StOP for short. Just as Curtis held the support group during the first season and second seasons, we offer a more intimate and personal approach to peer to peer support.  A support specialist is defined as specialists who support individuals with struggles pertaining to mental health, psychological trauma or substance use or abuse.

The curriculum through Psych Armor another veteran charity that is partnered with the organization offers our team valuable insight into taking care of veterans and or servicemembers. All this information can very well be extrapolated, certain approaches and technics one can apply them to the civilian world.

As it stands since the age of 10 I’ve been through quite a few traumatic experiences in my life from seeing someone killed in front of me, to getting shot at with intent to kill, getting carjacked, sexually harrassed,  hurricanes, suicide attempt several others. To help others with traumatic experiences you have to treat them as absolute.

The Curtis Hoyle character is a Corpsman played by  Jason R. Moore (The Marines do not train medics, they have medic elements attached from the Navy, for anyone that might not know) He has a nice backdrop of reason to Castles somewhat aggressive strategy and tactics. Agent Madani played by Amber Rose Revah as always extremely beautiful, fierce and intelligent. While sometimes emotional, she learns that reacting emotionally to complex situations can yield complex results.

There’s a lot of other actors in the series who did well with their perspective roles not a single boring moment as the series concludes. Billy Russo’s evolution is very curious from a mental health standpoint.

Physical injuries change public perception of oneself but what if the more critical scars and wounds are the invisible ones, the ones you can’t quantize. That is what really defines the Jigsaw character as an antagonist in the Netflix series.

While he did suffer facial injuries nothing suffered more than his mental health.

I don’t want to create false expectations, I like to go into things with objectivity. Enjoy it like it is, I am not saying that the series is perfect, they are all flawed. Incidentally, flaws add character to video games, movies, comic books, etc and even people. This time around I thinks that Ben Barnes steals the show with his portrayal of William “Billy” Russo.

The tragic ghosts that haunt him, the wounds the scars, that guide his thoughts and actions. As always the music fits the bill very well sometimes as I said in previous reviews sometimes part of the story is feeling, without it there’s no investment.

The music shows the emotional side of the internal conflict of the Frank Castle character.

This is Nightmare thank you for taking the time to read my quick fire review for this. I am well aware of the time since the series came out. 4.8 is my review score in a score from 1-5, this series is from me highly recommended.

Aspiring streamer and writer. I am a volunteer for Stack Up from the island of Puerto Rico.

Enter your e-mail address and subscribe to our newsletter.